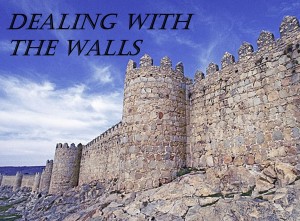 The first time I was told that my limitations are unreal, it made no sense to me because I believed that Fact is Fact. It is difficult to believe that a problem doesn’t exist when it stands right in front of you. BUT Hey! I was wrong and my whole perception about everything was wrong. I needed to renew my mind according to Romans 12:2.

Immediately, the eyes of my understanding were opened and I saw the Children of Israel right before the red sea; (Exodus 14). I saw them before Jordan River (Joshua 3). Again, I saw them behind the wall of Jericho (Joshua 6). I saw David and Goliath in 1Samuel 17, Elijah and the four hundred prophets of Baal (1kings 18:22). Elijah and Elisha before Jordan River (2kings 2:8). I saw Daniel (Daniel 6). Shadrach, Meshach and Abednego, and the fiery furnace (Daniel 3), I saw Esther and king Xerxes (Esther 2) and Jesus some few hours before He was arrested (Luke 22:42). I saw those walls before them.

Thank God none of them moved back. They faced what appeared to be their limitations. And as they got closer, those walls fell down flat. God told Moses to move on (Exodus 14:15) when the Red sea was in front of Him. As he stepped forward, it turned into a dry land (Exodus 14:21). The same happened on the Jordan River (Joshua 3:16).

Jericho fell down just by the shout of trumpets when they (children of Israel) obeyed God’s word (Joshua 6:16, 20).

David ran towards Goliath in 1Samuel17:48. Elijah stepped forward before he prayed for fire from above (1 kings 18:36). Esther went straight to the king’s hall and nothing happened to her. (Esther 5:2).

Daniel, Shadrach, Meshach and Abednego all saw what could limit them, yet they stood firm. Jesus Christ felt the pains ahead of time but he moved on to carry the cross for you and me.

I don’t know what you see as giant before you. I may not have any idea about how terrible your situation is right now. But I came to tell you that if you can move ahead and see things from God’s perspective, then you would realize that those limitations are not real. Keep Moving FORWARD because God is on your side.

Enjoy serving the Lord,
and he will give you whatever you ask for.